A quick update to my ranking of Major League Soccer's assorted club uniforms for the 2013 season: last month, Sporting Kansas City unveiled a third jersey. What do you think? 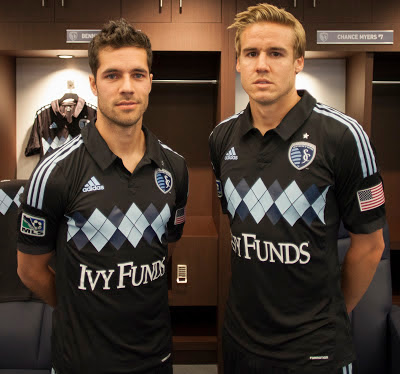 Black with an argyle light/dark blue pattern across the chest. It's apparently a reference to the team's original jerseys back in the '90s when they were known as the wonderful Kansas City Wiz, later extended to the Wizards.

The jersey is great. The design is original and striking. The sponsor logo below the argyle pattern makes the whole thing look a bit too busy, but we can't escape big ol' sponsor logos even in specialty shirts... or can we?

Scottish giants Celtic and Rangers seem to be able to convince their sponsors to minimize their logos when the clubs want to release commemorative jerseys. Celtic's new 125th anniversary kit features the Tennent's sponsor logo in small white-on-white lettering below the team crest: Why couldn't Sporting KC convince Ivy Funds to do the same?

Anyway, the dark new third jersey is so good, I'm not sure why it's a third jersey. Really, it should replace SKC's decent-but-unremarkable current away jersey: 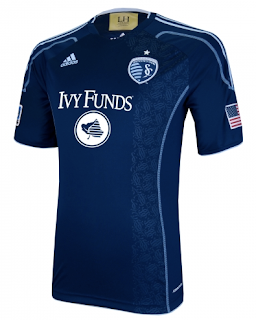 But the whole "acknowledging our uniforms from the '90s" thing may be a sham. I don't recall nor could I find online any evidence of 1990s argyle jerseys in Kansas City. I guess the jerseys are meant to be a reference to this beauty: 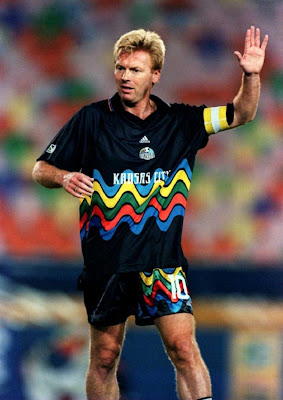 A black shirt with a wavy design on the chest. But way more groovy than Sporting KC's new third jersey.

Overall, Sporting's new kit is a great design, but it doesn't quite bump the team up in my previous jersey rankings.
by Unknown at 11:50 PM