Music: they say it's the universal language.  Well what about deaf people?  The people that say that look like assholes now don't they? Back on topic, music is present in almost all multimedia.  A lack of music in a video game is a stylistic choice that would be more striking to most gamers than a tremendous score (score in the musical sense not "point" sense, though I guess it really works either way).  I do love me a good original  soundtrack and find that I enjoy/appreciate game music a little more than regular music.  That is to say, if I was to listen to two identical songs but one was labeled "Generic Overture 5" from Even More Olde Timey Classics and the other was "Theme of Mobius 1" from the Ace Combat 04 official soundtrack, I would tend to gravitate towards the one that I remember engaging in high-stakes dogfights to.

It's a safe assumption that most people are the same and this applies to anything (tie-in marketing is more or less built around this idea).  I mean I mark more for Diamond Dallas Page's theme than "Smells Like Teen Spirit."  There's some association thing going on that causes people to enjoy certain products of an inferior quality if they are related to something else you enjoy.  But you don't need me to tell you that and right now this whole piece seems asinine.


Let me get to the point: game music is good.  Game music with a vocal track is a whole different level.  No matter how you hum a tune, doing it with other people makes you an a cappella group, and you don't want to be an a cappella group, do you?  So I will be singing the praises of some of gaming's vocal anthems. 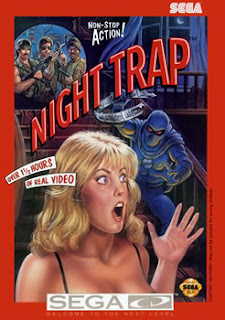 We begin this excellent adventure with an full motion video game shrouded in controversy: Night Trap.  Much ass-devastation was had by the typical anti-gaming crowd of the early 90's over the game's supposed "ultra-violent" and "sick" content.  Hate was particularly aimed at one specific game-over scene.  Night Trap players would contest these claims, but were too busy reevaluating their life and the choices they made that would lead them to play the game.  Concern really should have been focused on the fact that the good guys were totally into SCAT.

This has no bearing on the soundtrack though, as the only thing offensive about the song "Night Trap" is how generically poppy it sounds, which invariably means you're gonna remember the lyrics whether you like it or not.  Hell, I've never even personally played the game, since FMV is only acceptable as camptacular Command & Conquer cutscenes or completely badical light gun shooters, and yet I find myself occasionally warning "watch out behind you, NIGHT TRAP!"

Even though the point of this exercise is to highlight vocal themes, just listen to that sax.

Love is easy by the light of day,
You get the boys to play away
Though at sundown when darkness falls,
Passion burns and danger calls
So, girls, go out only if you dare...
You better be good,
You better beware!