The House of the Scorpion vs. Blindsight: paratext

Upon starting Nancy Farmer's young adult novel The House of the Scorpion, I was taken aback by the wealth of information. Not at the end of the book, but at the beginning appears a short appendix: a cast of characters and family tree. 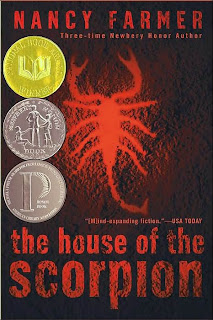 This immediately made me think of Peter Watts' Blindsight, another sci-fi book with this sort of paratext, albeit much more in-depth. The House of the Scorpion is intended for "ages 11 and up;" it's preparing middle school kids for books like Blindsight later on in life.

Once I made this connection, more paratext similarities began to appear (by the way, I'm reading the 2004 paperback edition of The House of the Scorpion, and I've got the 2006 paperback edition of Blindsight). Despite having different publishers, both books are nearly the exact same dimensions, and the title pages of both books feature words in black lettering with an accompanying design in gray.

What is the purpose of appendices in books? Why do they appear in science fiction so often, both adult sci-fi and sci-fi for kids? Perhaps it's the very definition of science fiction that we grapple with so often: supernatural worlds justified through specific explanations. Unlike fantasy, science fiction seeks to have rational reasoning for everything going on.

But arguably the most famous appendices for a work of fiction appear at the end of J.R.R. Tolkien's The Lord of the Rings, the quintessential fantasy epic. In fact, Tolkien explains nearly everything in his world; his description of Elvish languages are so detailed that there are people who study it and have learned to speak it in the real world.

Does this make The Lord of the Rings science fiction? Probably not. But it's fun to think about.
by Unknown at 4:44 PM

Email ThisBlogThis!Share to TwitterShare to FacebookShare to Pinterest
Labels: Blindsight, Nancy Farmer, Peter Watts, The House of the Scorpion