I love violence. A list of my all-time favorite movies would undoubtedly include such family-friendly classics as Battle Royale, 28 Days Later, and Kill Bill.

But the violence in Grant Morrison and Frank Quitely's We3 bothers me. It seems unnecessary. Gore has a place in fiction when it serves a purpose, whether that's furthering the storyline or evoking a mood. We3's blood and guts simply evoke the mood of "gross" to me. It doesn't hook me in, it doesn't make me empathize with the characters or despise the characters. It just comes off as frivolous.

Let's take this scene halfway through the comic, for example (I apologize for the low scan quality). Our protagonists are escaping across a bridge when they get ambushed by a horde of cyborg rats. The two-page panel on top is the establishing shot, showing all the action with all the characters on an identifiable background.

Quitely cleverly conveys depth in the image by silhouetting the rats on the bridge supports in the foreground. We see Tinker and Bandit reacting to the attack, snarling with teeth bared. Pirate escapes off to the right. This panel works. It tells the story and illustrates the emotions of the characters. Now let's look closer. 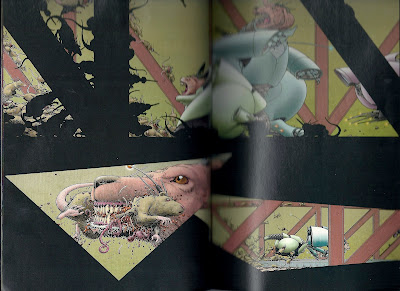 Two triangular panels follow: a close-up of Bandit viciously chomping a rat in two, and the We3 crossing to the other side of the bridge.

What was the point of that chomp?

It illustrates that Bandit is fighting back. But does the scene evolve into a full-on battle between the rats and the We3? Nope. They continue their escape in the next frame. If the chomping frame were taken out completely, the reader would not have lost any information.

"But comic books are more than just the plot line," you may assert. So what deeper feeling does the chomp convey? That Bandit kicks ass? We see plenty of ass kicking through the rest of the comic. That the rats are stupid and expendable? We definitely see that throughout the rest of the story. This particular panel brings absolutely nothing to the table, except for one thing: violence.

This is violence for violence's sake. It's the wrong way to do gore. Yes, the rat's guts are realistic and detailed, but all this does is satisfy readers' bloodlust. It's The Human Centipede of comic book frames.

Don't get me wrong. Gore can be done right. It's even done right in other parts of We3. The early scene where the scientist is demonstrating the drill-rats to government officials comes to mind; this is a scene where the unsettling violence makes us feel a certain way towards the humans involved and helps deepen our attachment to the story. Unfortunately, this is only a small percentage of We3's violence. The rest is like Bandit chomping a rat in half: bloody filler.
by Unknown at 11:00 PM